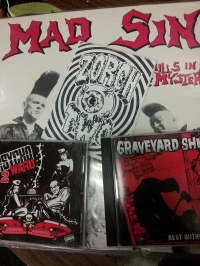 When everybody was getting ready for their two-spoon fulls of psychobilly-garage-trash on
The All New KGRG FM, Jake was pickin his nose and goofed up the intro. And that was only the start of the whole mess.

Something about this evening had these goddamn robots against us. Sure, most people would blame it on operator error, especially when the host can’t even remember which bands are from where (Sorry, Tabaltix), but you can’t shift the blame on a robot that randomly shuts off.

We were just ankle deep into in the evening’s rebroadcast of Gone Mental, when that computer overheated and went kaput. I would like to challenge everybody to try cueing up a record blindfolded while avoiding silence on the airwaves. We normally try not to ramble so much, but the real challenge is that KGRG’s turntables are about six feet away from the mic, and that’s about four feet too many for this deejay’s cubby little hobbit arms.

This evening, we were also giving away tickets to Maris Farms for their Haunted Woods, and Andrew from Snohomish was the lucky Invader who got to claim em.

Still need more Zorch Radio? Check out the Archive Page, all organized and easy to sort through. Check out our Events Page for figuring out how to spend your nights off . Follow Zorch Radio on Twitter and like us on Facebook. Don’t want to do anything because you think we’re terrible? Check out the Broadcast of the Week archive, highlighting other shows that are better than ours. More info is also on the contact page.

This entry was posted on April 1, 2013 by Zorch Radio. It was filed under Audio .

Zorch Radio exists first to connect people with the legacies of our artists, and second to maximize the artist's and label's revenue, all through locally conscious, interactive programming. All royalties for Real Punk Radio's live programs are paid through Stream Licensing. Real Punk Radio is compliant with ASCAP, BMI, SESAC, SoundExchange, and SOCAN royalties and performance fees. Zorch Radio's playlists are reported on a monthly basis. Uploaded episodes are licensed through Mixcloud, which includes royalities paid through playlist reporting.